In this entry, I'll return to the photo from Part 1 and go over what I'm thinking about with the finishing touches. Once again, this is one of my photos from Camp Hollywood 2014 from the amateur Lindy finals. 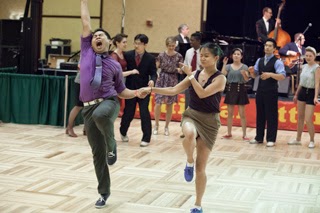 This is where I left off, with the preset applied.

The first thing that bothers me is that the photo feels a little off balance. The foreground dancers are almost in the center, but are just a little bit off, so I feel like my eye wanders to the open space on the right, then gets pulled left. 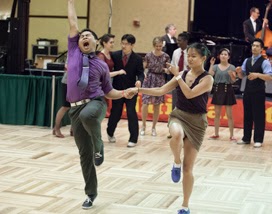 First, I cropped in to center the foreground dancers. Normally, I would also straighten it so the vertical lines are really vertical. Also, I usually like to keep the 1.5 aspect ratio when I crop. But doing either would mean losing more of his arm and her screen right foot.

Next, I thought it still looked a little bit green. I was probably looking at the back wall. 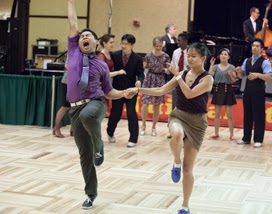 Looking back, I don't think it's that noticeable, but it made me feel better.

The next issue is the hot spot on the floor in the lower right. It is one of the brightest parts of the image, so it draws my eye a little bit in a bad way. 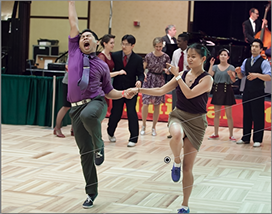 I used the gradient tool to adjust the Exposure -0.55.  That is, knocking it down by about half a stop. It's still bright, but not as bad.

At this point, the changes from the preset just took a few seconds.

Once I've adjusted the overall image, I try to find ways that I can emphasize the foreground dancers. This is the slow part.

One way is to make them brighter.

Here, I used  Adjustment Brush and painted a mask.

Also, I raised the Highlights +5. As it turned out, the Highlights were not that strong, and in many other photos, I changed my mind and actually wound up reducing them by -10 or so.

In Part 1, I reduced the Saturation for the whole image to try to de-emphasize the red and yellow banners in the background. But that desaturates everything, including the dancers.

I raised the Saturation in the Adjustment Brush area by +25. The purples and blue on the dancers should be a little deeper here. Also, as colors get more saturated, they often get darker, so this is fighting the brightening from the previous step.

In the adjustment brush, a couple more tools that can help emphasize the foreground dancers are Contrast and Clarity. They behave somewhat similarly and I'll compare them below. I think it breaks down like this:
I'll wedge them separately with some exaggeration just to show what each does: 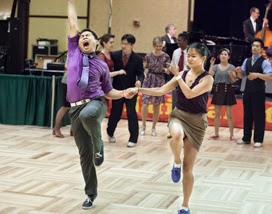 I wound up using both Contrast and Clarity, both at +20 so the settings on the brush adjustment wound up being:
Painting the region for the brush adjustment takes me somewhere between one to five minutes. If the highlighted couple is massed together in closed position, it will probably be around a minute. If it is a team with several couples with their limbs extended, it will be more like five minutes to get a clean matte around all the long thin areas.

One "last" thing to take care of on this one: there are some >ahem< dark areas on the shirt that I actually want to get rid of and raising the contrast and clarity just made the problem worse. 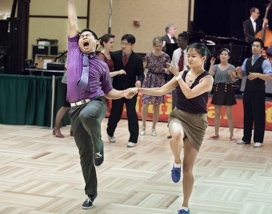 I couldn't completely paint them out, especially with all the creases but I tried to at least make the dark spots less noticeable (but of course, since I'm discussing it, they are all you will see from now on). This required zooming in with a small precise brush. I think I painted about 6 areas, some overlapping. In all of them, I raised the exposure between 0.25 and 0.9.

In other photos, I also desaturated the dark areas and/or shifted the color temperature to try to better match the surrounding area. But in this case, I only painted in exposure adjustments.

I'm pretty sure this part (painting mattes for the dark spots) by itself was in the 3 to 5 minute range. Luckily, I didn't have to do this for many photos, but it required a lot of fine grained adjustments and a lot of brush strokes. I know I didn't completely eliminate the problem, but I hope I lessened it a little bit.

This is the image that I first published in my Camp Hollywood set, and it's still there on Facebook.

But one more thing just drove me crazy. The matte was pretty sloppy and looked like a glow or something, so I needed to spend another minute or so to clean up the edges.

And that concludes the story of editing that photo.

Here, I'll apply the same ideas to another photo. In a lot of my evening photos, there were lights on the stage, even when there was no band. This made anything white really bright and I thought it was especially distracting in a still image. When I just applied my preset, the drums and the shirt were by far the brightest things in the scene, so even when I'm looking at the faces, there's something pulling my eye away.


There were a lot of shots where I used an Adjustment Brush to target the drums, often a shirt, and (sometimes) the glare on the speakers. Here, I used the Gradient Tool, but with the same settings that I would with the Adjustment Brush. I tried to mostly work with the Highlights(-74) because the problem was really in the brightest areas and I didn't want to darken anything else (like the faces). But that wasn't enough, so I knocked the Exposure down a little bit.

For the Adjustment Brush, I've gone though most of these settings in the first example. A few differences:

A long time ago (Oct 2011) when I had my last burst of posts on this blog, I said something like "next time, I'll talk about composition and editing" and abruptly stopped. This is a lot of what I had planned to cover. I also had a broken link to some course materials that have moved. I found those materials again in an archive:
http://old.siggraph.org/education/materials/siggraph_courses/s96_course30.pdf
Specifically, look at the Sharon Callahan chapters on emphasis and balance.

In this post, I ran through some examples of how I tried to emphasize the dancers and to de-emphasize distracting parts of the background that pull focus using some of those ideas:
Usually, I applied those with the Adjustment Brush or Gradient Tool to have a different setting on the dancers then on the background.

This is most of what I intended to cover when I stopped last time. I was also going to show examples for cropping and tangents and touch on the "rule" of thirds, but maybe I'll cover that some other time.

In the next couple posts, I'll apply the same ideas in composition to a couple other examples from Camp Hollywood with different lighting situations. Then I'll wrap it up and talk more about the process and logistics.
Posted by Steve Hwan at 11:55 PM