This continues my notes on editing my photos from Camp Hollywood 2014 with some examples from Lineage Dance.

This time, maybe I'll just have a venting session. This entry is a very long way of saying "I adjusted the Color Calibration Blue Primary Saturation to -40, but that doesn't always work, especially if your primary light is LED."

First, let me point out the lights I'm talking about.  The LED lights are at the top of the "Camp Hollywood" banner seen in the wide shots(first column). They cycled between red, yellow, green, blue, and some kind of violet and/or magenta.

As a lighter, I can see the appeal of LED lights.  They are low power, they don't get hot, and you can dynamically change their color to anything without needing gels, so there is a tremendous amount of flexibility.

As a photographer, I get really frustrated with these things, especially the blue part. (note: blue is a component of cyan and magenta)

A few notes and observations about the photos above:
If you're using LED lights and want to be (Canon) camera friendly, I have some ideas:

In the above examples, the first two columns are the normal Camp Hollywood lighting where the LEDs are coming from the back and usually act as a rim. The dominant lighting was the chandeliers, and they had a controllable spectrum. It seemed warm, though I don't know if it was incandescent or compact florescent.

The last column was one of the nighttime jam circles.  I was standing up on the stage, so the LED lights were acting more like front lighting.  I did have my flash. Unfortunately, I don't remember if i had it gelled and I don't remember what angle I had it at. Since there was the scaffolding right above me, I think I had the flash angled mostly up, but slightly forward, but not a direct blast.

I've noticed at Camp Hollywood 2014, Inspiration Weekend 2014, and at some performances at Lineage, the magenta and pure blue seems to cause the clipping the most.

Here, look at everywhere the magenta light hits both the foreground and background couples. In particular, the outline around the heads of the rear couple, and the highlights on the shoulder and pocket of the guy in the front.

Reducing the saturation in my preset helps a little bit.

The adjustment that seemed the most effective at reducing the clipping while still maintaining the other colors was:


Adjust "Blue Saturation" in the Camera Calibration at the bottom. I wound up taking it down to -40.


This surprised me because I usually don't touch the Calibration section at all, and this felt like an extreme change. I think I could get away with it here because this was just a supplemental light and the main light in the room was Tungsten-ish.
This is the first time I've this setting, and I think I've used Lightroom for more than 5 years.

I wound up using both types of desaturation and added this part to my preset.  The colors are a little bit muted, but I think they're mostly strong enough for my tastes. In Part 3, I'll talk about getting some saturation back for the foreground dancers.

Here is what the desaturation looks like when I apply it to the sample photos from this page.
This had the right balance (for me) of addressing the clipping issue without changing the other colors too much.


At Camp Hollywood, the LEDs were generally supplemental, and the primary lights were the chandeliers, so as a baseline, it was similar to a Tungsten room.  But if the LEDs are the primary light source, then saturated blues and magentas can get more difficult to deal with.

Here is an example of using Blue LEDs lighting from the front:
One way to address the blue clipping would be to use a higher Temperature setting. Above, it seems to disappear around 5500. But let's say I thought the Tungsten settings were closer to what was in the show, and that was what I wanted to present.

One approach may be to adjust the Highlights. The objectionable part is really only in the highlights, so maybe I can soften it on the high range.

But as I lower the Highlights, I see the clipping/banding is still extremely persistent.  It would only get acceptable if I was to push even farther than -72.

The problem though is that I actually do want to have highlights. Without them, the image is a little dull. I just want the transition to the super bright values to be a little more gradual. With the higher color temperatures, I can see that there actually is color data at the high end, so it is not a problem on the sensor, but how I'm weighting the values.

Another approach may be to reduce the Saturation. One of my hypotheses is that the LEDs are illuminating too narrow of a frequency band and overwhelm the blues and don't have enough red and green data to figure out a smooth transition. Reducing the saturation equalizes the channels a little.

But similar to the highlights, I don't think this gracefully solves the transition problems either.
For Camp Hollywood, I found adjusting the Camera Calibration Blue Primary Saturation to be very effective. But here, I thought it changed the color too much, both muting it and shifting it too violet.

To be fair, if I also adjusted the Blue Primary Hue (maybe to around -20), it does start getting back to the original blue/cyan. But the feel of the image is very different. It starts looking monochromatic with a tint, rather than something with true color.

I'm not saying there's anything wrong with doing the tinted monochromatic thing. I'm just saying that's not what my vision was for this set or this photo. One of my quirks is that I don't like to release albums with a mix of black&white and color. I'd rather release 2 albums.

But let's say I did want to pursue the black&white route. At the top of the Lightroom settings, there is the Treatment, which is usually color, but here, I'll set to black&white. This photo was really bright when I did that, so I knocked down the exposure a little more than 2 stops.

Here, there is unpleasant clipping / banding from blue LED light on the backdrop.

Saturated magenta doesn't really have a good color temperature either.

Also, sometimes the light blows out white even though when I saw it in person, it was a solid color with a nice gradient.

Speaking of a strange white clipping, I really don't understand why it goes white. In person, it was just blue.


Again, the most faithful color seems to be somewhere between Tungsten and Florescent. The higher color temperatures veer too far from the right colors, or they just desaturate and lose them completely. If I start with the Florescent though, just take my word for it that the above adjustments (Highlights, Saturation, and Color Calibration Blue Primary Saturation) don't fix this artifact. I still haven't found anything that does.

In swing dances, I've encountered the LEDs once before at Inspiration Weekend 2014.

Now, a week before the weekend, I had already decided to process everything in black and white before I even knew there were LEDs. When I got to the venue and saw the LED lights, I was glad to save myself the headache. But as long as I'm discussing  LED lights, I thought it might be fun to take one of my shots from that weekend (I think I found an appropriate one) and mention the challenges that color would have provided.

From what I recall, the lights used magenta quite a bit. There were a couple chandeliers in this room, but not quite as soft as the ones in Camp Hollywood.

Here, there were actually LED lights on poles in the 4 corners around the performance / contest area.

My approach would be the same as in Part 1 though. First, I feel out the temperature. First, I look at a couple standard presets.

Then I use the eyedropper tool to sample a few white objects in the scene.

The magenta just dominated the image, and was not (in my opinion) a pleasant tint for the people, so I feel like I'm forced into a box of getting rid of it, then dealing with the fallout from the green. Having really saturated colors removes a lot of flexibility in processing the image.

As I remember, the back walls were beige, but they did get some color from the room lights. If I was doing this for real, I would probably use settings like the bottom right. (Temp 2850, Tint -48) 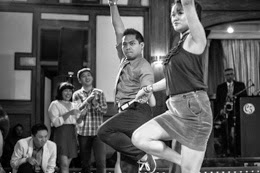 Though as I said, I had decided to process Inspiration Weekend in black and white so I wound up not having to deal with the magenta menace after all. I will say though that reviewing this set, I didn't see a lot of clipping, so maybe it wasn't as bad as I remembered.


All of this has been a very long discussion to just end by saying:
I added a Calibration Blue Saturation of -40 to my presets.

And if you're wondering, here's what it looks like applying it to the example photo from Part 1.

And this is what it looks like with those presets along with the Camera Calibration Blue Primary Saturation at -40 discussed in this entry.

I think it didn't really have the LED problem to begin with, but also, I don't think making the adjustment had a significant impact on the photo.

It makes it easy to process(saves time) though if I can just apply the Calibration Saturation setting to all the photos, whether they need them or not.

And with that, I have my full Camp Hollywood 2014 preset.

In the next post, I'll go over the finishing touches to draw more attention to the dancers.

I know I need to study these lights more. I think it may be a matter of having a different Color Temperature/Tint profile and maybe calibration settings. One day, I'll have to do some wedge tests and maybe find some tools to look at the numbers in the raw data. For now, these lights are just a source of frustration, and they're just getting more and more common.
Posted by Steve Hwan at 7:03 AM