Playing With The Lytro Illum 2: The Camera UI

Last time, I was discussing the technology in the Lytro Illum. This time, I want to briefly discuss the user interface of the camera.

For starters, the real deal is The Lytro Illum User Manual. Below, I may cite parts of it and/or my own interpretations and use. I'm not going to concentrate on the instructions, but more on what worked and didn't work for me. 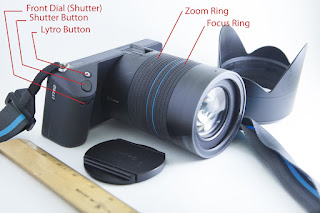 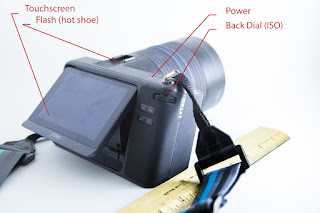 For a more complete description, see Lytro's desription of their physical controls. (also in their user manual)
I wish the Lytro had an Electronic viewfinder (EVF). Since I'm old, it's hard for my eyes to focus on something closer than about 18 inches. In my 5Dmk2, I can look through the (regular) viewfinder and have my eye right next to the camera. But in a mirrorless camera, they would do this with an EVF. I've seen one on a Sony alpha7ii, and it made it feel more like the interface I'm used to. It's not a huge omission, but it would have been nice to have.

I can customize the vertical menu on the right. Initially, it took a little getting used to. When I first started using it, I accidentally removed the white balance control and was stuck on auto-white-balance.

Once I got used to it, it was good to have and after a couple iterations, I landed on the set on the right. From top to bottom,
On the bottom line, there are some standard settings I expect to see - ISO, shutter, settings modes, estimated shots remaining, and battery indicator - the settings that are usually on the top of a bigger SLR.

The colorful orange/blue vertical stripe on the right is the depth assist bar, which I'll discuss more later.

The first point of frustration was that the auto-focus is very slow. Maybe I'm spoiled by the 5Dmk2, which focuses almost instantaneously in moderate light. (And yes, I know - Nikon often focuses even faster.) The Lytro auto-focus felt like it could take almost a second. It felt like the camera was having even more trouble tracking the moving subjects. For dance photos, this is unacceptable.

My workaround was to find times to preset the focus on something stable. Then during the dance, I don't reset the focus, and just take my chances. Since the gimmick of the camera is that it can refocus later, I was hoping that if I was in the ballpark, I could refocus later. I don't think that was really reliable, but I plan to get into that a little bit in the next entry.

The depth assist bar is the colorful orange/blue vertical stripe(see "On-screen controls" above). It shows the focus distance and the refocusable range. This is information that I think would be useful, but I think the real estate is wasted. In the photo of the controls here, it's not too bad, telling me that it focused somewhere between 2-3 feet away. But the refocusable range is from 1 ft to infinity, and that's compressed in the upper third(quarter?) of the stripe. For the photos I shot at Inspiration Weekend 2016, typically, the range was from 6 ft to infinity or 11 ft to infinity, and I didn't have a good sense for what the actual focus distance was. I would have liked to see a number reported for the primary focus distance.

The way I read the indicator here is that the primary focus is somewhere between 2 and 3 feet. I would have liked to see it report the secondary close peak and the secondary far peak too. The user manual shows a different depth assist bar that actually looks more useful, so it's possible I just need a firmware update.

I don't think there is really good feedback telling me what it actually focused on. It would have been nice to have the camera report back the focal distance so I could ballpark whether it is in the right range. Most of the time, the best I got was some indication that it was focused somewhere between 6 and infinity, which is not very useful.

The Lytro Button and Preview Mode

When you hit the Lytro button in the front, the stripe turns into a preview mode.
Instead of just telling you where the refocusable range is, it will estimate a histogram of how much of the image is at what depth. After setting the autofocus, the zoom ring can be used to adjust/refine it. This shifts the histogram up and down (examples shown below at different settings of the zoom ring). 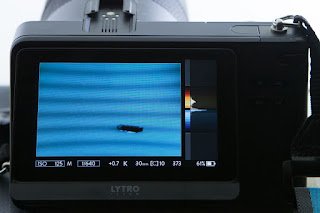 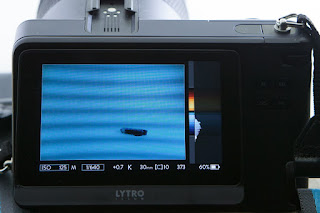 Connecting Depth to Living Pictures (Lytro Vimeo video) discusses what their depth values mean. Around 4:29, he discusses the depth range and briefly how one might want to compose a shot to emphasize the depth. I think that clearly I want to have tall peaks, but I think it's unclear if I want wide peaks or not, especially in the far/orange region. I think that with the wider lenses (smaller focal length), the depth of field for f/16 can actually be pretty wide, and that's what Lytro is calling the refocusable range. Their image sensor has a finite number of samples (40 MegaRays - approx 10 rays per pixel), so I don't know whether I want to distribute those over a narrow depth range to try to get a higher density of samples, and hopefully get a sharper image(but I don't know if that's even the case), or if I want those over a broader depth range to get a larger refocusable depth range. I think this applies more to the back (orange/far) samples. I think there's some discussion of this, but it's difficult to put into practice.

This video (Connecting Depth...) does kind of discuss where to put the peaks, but I don't think he really goes over whether the blue range is cleaner than the orange, or what to do if you're really not getting any peaks.

Shooting Simple Living Pictures (Lytro Vimeo video) - some more discussion about what a desirable histogram should look like.

Exploring Depth of Field (Lytro Vimeo video) says, "Even though the camera is always optically shooting at f/2, it's capturing 3D data as if you shot at f/16." (around 4:20) Looking through the charts in the ASC Manual, it looks like f/16 gets really deep, really fast, especially as you focus on objects a medium to far distance away. Their zoom lens says it's equivalent to 35-250mm. If you focus somewhere from 8-150 ft out (depending on the focal length), the back of your depth of field box is already way out at infinity.


The take-home message I got from the tutorials is that if something is a medium distance away, they suggest going really tight, zooming in. Or get up really close if you have to use wide. Or to summarize, most of their "good" examples seem to be getting the subject right next to the camera, like in a 10 ft box right in front of the camera. That could possibly work for a jam circle, though I actually had disappointing results in my jam circle shots. That could have been me not being familiar with the camera.

Most of the time, I don't think this composition(mostly up close to the camera) really works when shooting a Showcase or a Jack and Jill. I want to get head to toe shots most of the time. But that means getting a medium distance away (In Inspiration Weekend, I was probably 30 ft away a lot of the time). Even though I can get the camera to frame the shot for a 2D composition, that specific kind of shot seems to be poorly suited for a 3D/depth composition. I almost never got large full areas of my histograms like they had in their tutorial videos.

Lastly, there are a couple mysterious(to me) tools available:
Conceptually, they aren't difficult to understand what they are supposed to do. But I don't have a good sense for the hardware implications for them. That is:
When I adjusted the focus ring, it felt like the range of shapes of the depth histograms was different when I had an offset of -4, 0, or +4. But I don't know if that was real.